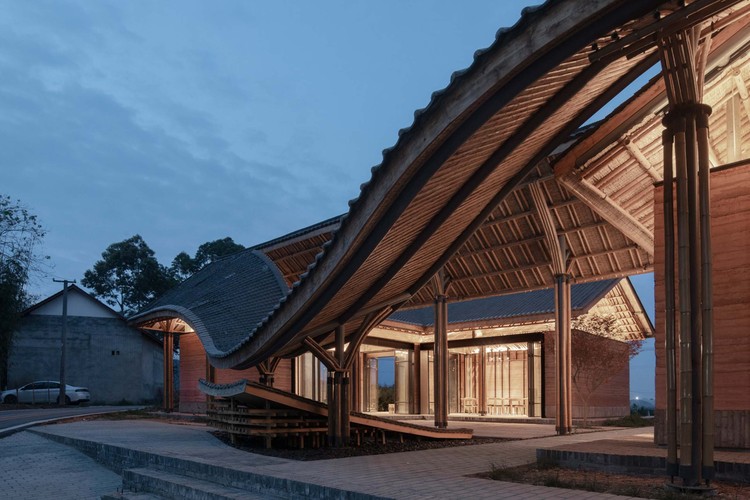 Text description provided by the architects. Yuan Jue Si Village，Jintang is located in the northeast of Chengdu, the head of the Tuojiang River, and the county seat at Zhaozhen, which is one of the famous towns in ancient Sichuan. The project of transforming the old courtyard of Hejiayuanzi into a village center is located here. With an understanding of typical rural architecture in Sichuan and the imagination of having courtyard houses in nature, the connection between the two original buildings is completed. In terms of strategy, it is reshaped according to the methods of dismantling, raising the house, mending, changing, breaking, and bringing in.

Dismantling is to remove the damaged and additional remnant courtyard. Raising the house means raising the roof by 1.2 meters to improve the lighting inside the building and create a comfortable space. Mending, i.e. the two broken houses have the same courtyard, but they are relatively independent. To make the houses closer, consider deriving the technique of ‘porcelain repair’ into the building so that the two independent roofs and the two disabled buildings are connected, redefining the spatial relationship between them.

Changing means combining the plane shape, extracting the twin roofs, and pressing down some ridges in the front to form a continuous spatial curved surface that is strewn randomly in front and back. Therefore, the traditional folding roof is integrated with the streamlined roof drawn from the side. Breaking, that is to make the courtyard space more pleasant, exploring the southern space of the south side of the damaged courtyard with the application of artistic techniques. Bringing in is to incorporate the manual-created landscape space into its half-open virtual space under the eaves.

With respect to space design, the relatively enclosed space of the original building was reorganized and extended in combination with the existing functions. The former purely inward-looking courtyard has become a courtyard with inside and outside, while the new building maintains the original relationship in appearance. Looking at this building from a distance, passing through the plant landscape, you could see its winding and leaping roof, and the natural circulation.

In terms of the choice of materials, the simple exterior wall facade is constructed by using rammed earth walls comprised of mud, sand, and gravel. The combination of transparent glass tiles and blue tiles form an intriguing conflict between modern and traditional elements.

Rammed earth is a material with the flavor of the times and localization. In the current era when concrete is the conventional choice, the designer is trying to redefine rammed soil- no longer a stressed structure, but let it become a maintenance structure. Although it is a maintenance structure, ‘ramming’ is ‘real ramming’, not fake. It must ensure that modern residents’ needs for the use of functional space in buildings, including the requirements for thermal insulation structures. Because of these requirements, we have done some research and practice on new technologies with rammed earth.

In the entire structural system, in addition to the steel structure, the indoor roof and facade mainly rely on bamboo for decoration and structural assistance. This use of bamboo is special to some extent, saying that it is not only a simple decoration but a decoration that is reflected by the structural system. The pliability and gentleness of bamboo can coincidentally neutralize the hardness and coldness of the steel structure. At the same time, this application of the new craft ‘bamboo’ is also a new attempt and exploration in practice.

Sun Jul 11 , 2021
From cleaning up fur to keeping dogs off furniture, there are plenty of essential tidying tips to help your home stay free from muck, dirt, dust and pet hair. “Adoring our dogs means embracing the mud and fluff of their rock and roll-over lifestyle, from mucky park rambles to the […] 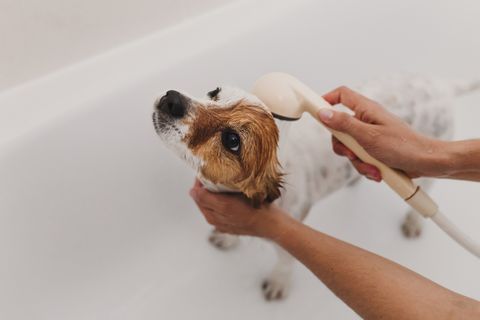