Jody Williams pulls a ceramic jug, a metal bell and some old cookbooks out of a canvas tote. “We’re starting to move in,” she says, setting her things down on a battered zinc bar top. “What happens, Rita? We collect and we collect. Then we empty our house. Little by little we float it down the block. But not too much stuff—this place is going to be in the Shaker spirit, minimal.”

Williams and her wife, Rita Sodi, are a few months away from opening the Commerce Inn, their third restaurant together in seven years. The chefs who elevated leafy greens and lasagna among downtown New York foodies are known to be hands-on outside the kitchen, too, sourcing furnishings with the same focus they bring to procuring oysters or wild boar. The Commerce Inn—like Via Carota, their Tuscan-style trattoria, and Bar Pisellino, a cosmopolitan coffee-and-cocktails spot—is located within a historic radius of Manhattan’s West Village that also includes their solo efforts, Buvette (Williams’s brick-lined French boîte) and I Sodi (Sodi’s ode to the cuisine of her native Florence), and their apartment.

The new place will nudge the couple two blocks south onto Commerce Street, a backwater that curves up at one end like a cheese knife before merging into Barrow Street. It will also pry them loose from the Eurocentric, olive-oil-based cooking that earned them the James Beard Foundation’s Best Chef: New York City award in 2019. With the Commerce Inn, Williams and Sodi are looking to the rural American legacy of the Shakers, a utopian Protestant sect that settled in upstate New York in the 1770s before spreading as far south as Kentucky and west to Ohio. (Today just three adherents remain, in the Sabbathday Lake settlement in Maine.) Better known for spare, utilitarian furniture and lifelong vows of celibacy, the Shakers were also fresh thinkers about food and farming who ate better than most 19th-century Americans at a time when food insecurity was often a daily reality.

Williams and Sodi have been nurturing the idea for over 10 years, inspired by a collection of Williams’s old family cookbooks and a fascination with Shaker design. The more the couple researched, the deeper their interest grew in historic Shaker cuisine. In 2019, when a restaurant space on Commerce Street became available, it felt like an ideal match of concept and setting.

Williams describes the menus they have in mind as “clean and simple and seasonal,” greenmarket ingredients treated to kitchen techniques common in the 18th and 19th centuries—pickling, smoking, fermenting. “You know, there’s smoked herring. There’s eel, there’s pickled oysters,” she says. “It’s not heavy.” They look forward to engaging with dill, buttermilk and cheddar cheese—flavors with few applications in French and Italian cuisine.

“Everything we do sort of comes out of nostalgia, and this desire to re-create something we’re missing,” Williams says. Seated at a pedestal table on spindle-back chairs handmade for the restaurant, she and Sodi page through a yellowed cookbook collaged with newspaper clippings and dodge questions about the menu (“coming along”) for opening night. “Let’s say we had some smoked fish,” Williams says. “We’d do a little bit of smoked trout and then asparagus and some brown bread for lunch, and maybe there’s a beautiful pea soup with a little bit of seasoned buttermilk swirled into it. And maybe you want some cheese with a unique honey at the end of the meal—and maybe we’ll have strawberry shortcake for breakfast.”

For Sodi, the Shaker pursuit of simplicity was her way into the project and a bridge to the pared-back Tuscan farm cuisine she grew up with. A former fashion executive, she came to the restaurant business in middle age as a passionate amateur; her family traditions have been hard to shake. Williams, who was raised in Northern California and came of age in a series of professional kitchens in New York and Italy, has a proclivity “to mess something up,” as she puts it.

“We’re always reaching for a high bar,” Williams says. “And the truth is, we wear ourselves out at 50 or 60 percent, and spend every day after that being highly doubtful, unconfident and self-critical.”

The Commerce Inn was a few months away from opening when Covid-19 arrived. The energy they’d spent on getting its reclaimed floors and hand-troweled plaster walls exactly right seemed wasted. They talked of giving up the space and canceling an order for a gleaming French Athanor range they’d splurged on, but it had already arrived in New York. Williams does not see a silver lining in the delay, despite a buzzing takeout business and sales of Sodi’s family olive oil over the past year. “We don’t pivot, this is what we do,” she says, glancing at the ironstone platters and vintage clock on the walls.

“Maybe the one positive thing is that everybody gets to rethink what’s important,” she adds. “You do your best to preserve what’s really important to you about your neighborhood—[maybe] that’s peace and quiet and cleanliness and a sense of history.”

As the West Village has lost some of its unique character over the past decade, a slide that accelerated during the pandemic, the couple has felt a responsibility to push back. With pew-style booths near the bar and wraparound meetinghouse benches in the dining room, the restaurant captures the plainspoken rigor of Shaker craft and, by extension, American ingenuity. To carry out the work, the duo turned to local collaborators, including Michael Smart of Urban Aesthetics, who crafted the bar, and architect Ben Bischoff of Made, who oversaw the furniture and some of the lighting. “Everything was hardwood, lots of shaping, lots of milling, lots of turning,” Bischoff says, adding that drawings were scrapped in favor of full-scale mock-ups. “I think we literally built the entire restaurant in foam core.”

Opening a Shaker-inspired place in unpastoral Manhattan may sound like a disconnect, but Lacy Schutz, executive director of the Shaker Museum in Chatham, New York, and a friend of the couple’s, says the Shakers were also movers: They ran profitable businesses selling seeds, medicines, brooms and chairs—and cloaks, which the community marketed in the lobbies of upscale hotels. The sect’s austere interiors nurtured a bounteous outlook on life, Schutz says, noting that their core values still seem progressive today: gender equality, racial equality, pacifism, communal living, sustainability, food security, innovation and, above all, utility.

“The idea that they didn’t design something for beauty, but for functionality—Rita and I are like, ‘That’s right on,’ ” Williams says. “But they had such beautiful kitchens,” Sodi adds. “Oh, my God. I would love to have a kitchen like that.”

As the shelves on Commerce Street start to fill up with jars of pickled peaches and fiddlehead ferns and the menu comes into view, so does a desire to make the restaurant their own. “The word Shaker, the word American, we don’t really want to use them,” Williams says. “These are the ideas that have inspired the Commerce Inn. Now let’s see what’s for lunch and dinner.”

Studio Other Spaces campaigns for nature at Venice Architecture Biennale

Mon May 31 , 2021
Studio Other Spaces, the office founded by artist Olafur Eliasson and architect Sebastian Behmann, has created an installation with contributions from 50 participants of the Venice Architecture Biennale. Called Future Assembly, the installation illustrates an imaginary future that centre’s the natural world in an international collaboration informed by the alliance […] 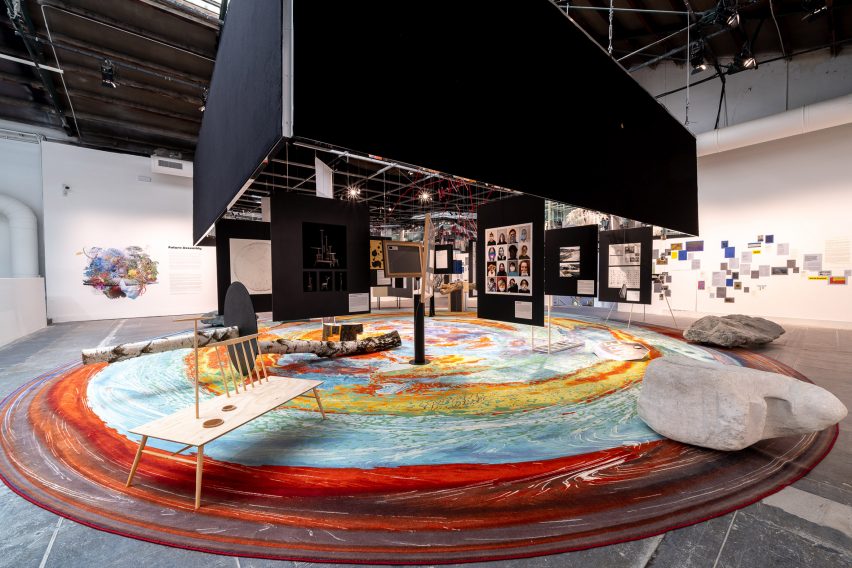