A beehive-inspired installation by a design studio based in Malta and London is one of three winners of a competition organised by the London Festival of Architecture (LFA) and Discover South Kensington. The aim was to create a series of ‘green interventions’ on London’s Exhibition Road this summer, as part of The South Kensington Green Trail.

The installation, titled Home Away From Hive, celebrates the complex forms and structures of wild bees’ nests through a series of timber, lattice intersections that in turn build a system of integrated planters, which act as a playground for wild pollinators. It is on display at the entrance to the British capital’s Science Museum.

“Hearing the news that our team had been selected as a winner for this competition was overwhelming and exhilarating,” Jonathan Mizzi, founder and director of Mizzi Studio, says.

“Events like the London Festival of Architecture hold major significance to the architecture and design world not just in the UK but on a global level. They act as barometers for where the industry is heading and what its greatest concerns and priorities are. For us to have a seat at that table – to act as protagonists in the debate on climate-conscious architecture – is a huge honour.”

He adds: “It’s also a massive responsibility and one that we take very seriously. Events like these have the potential to help studios like ours have more influence on how larger-scale projects are delivered. We have fully taken on the opportunity to make this installation a beacon for sustainable, nature-led development.” 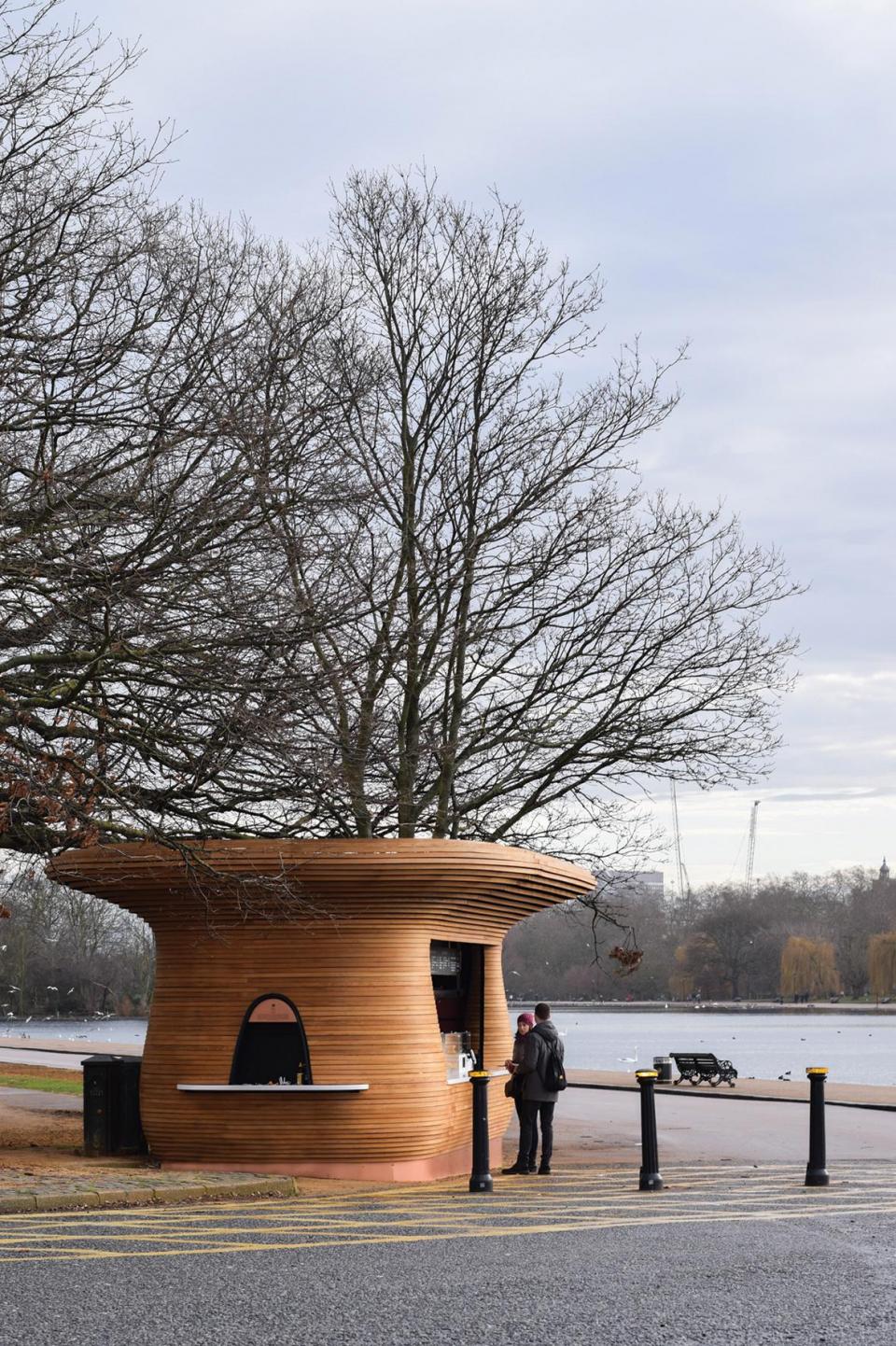 Home Away From Hive offers a safe space where people and bees can coexist, covering an area of 40 square metres and comprising two structures that are linked to create three archways and a circular window, which opens up views throughout the entire structure. Visitors to the Science Museum may interact with the structure and learn about the importance of biodiversity as they weave their way through these archways.

“Home Away from Hive is a demonstration of architecture’s role in bringing nature back into our urban environments. Globally, there is a big discussion on a practice known as ‘urban rewilding’. This means creating spaces that promote the restoration of nature within built-up areas like building parks on empty or derelict land, incorporating more biophilic design or simply allowing nature to reclaim space,” Mizzi explains.

“We saw this project as a contribution to this approach as well as an opportunity to highlight the importance of respecting the planet’s ecosystem. Bees are a huge part of that ecosystem, essential to the way humans and other living creatures are sustained.”

The architecture and design industry has very recently seen a massive shift in practice towards trends that favour a nature-led approach. Mizzi Studio has been focused on this philosophy since day one of its foundation in 2012.

“Our architecture holds the natural world as its greatest teacher and inspiration,” Mizzi, who divides his time between Malta and London, notes.

His multinational, interdisciplinary team follow a set of broad principles that underpin all their work, acting as practical tools to achieve this ambition.

The first is that they design buildings, spaces and objects that visually echo the “beautiful organisations that exist in the natural world”. This is known as biomimicry and also extends to zoomorphism.

“Many of our buildings are abstractions of patterns that occur in the organic world. For example, the copper roof to our Colicci Coffee project at Westfield Stratford is modelled on the mouth of an orchid. The resemblance isn’t explicit but suggests the essence of the flower’s anatomy,” Mizzi points out.

“This in turn harnesses the power of symbiotic relationships that exist in nature. An orchid’s mouth, shape and smell attracts pollinators to its nectar and from that interaction life blossoms and multiplies.” Likewise, their Serpentine Coffee House in Hyde Park follows zoomorphic principles in that its form evokes the movement of a stingray in flight. 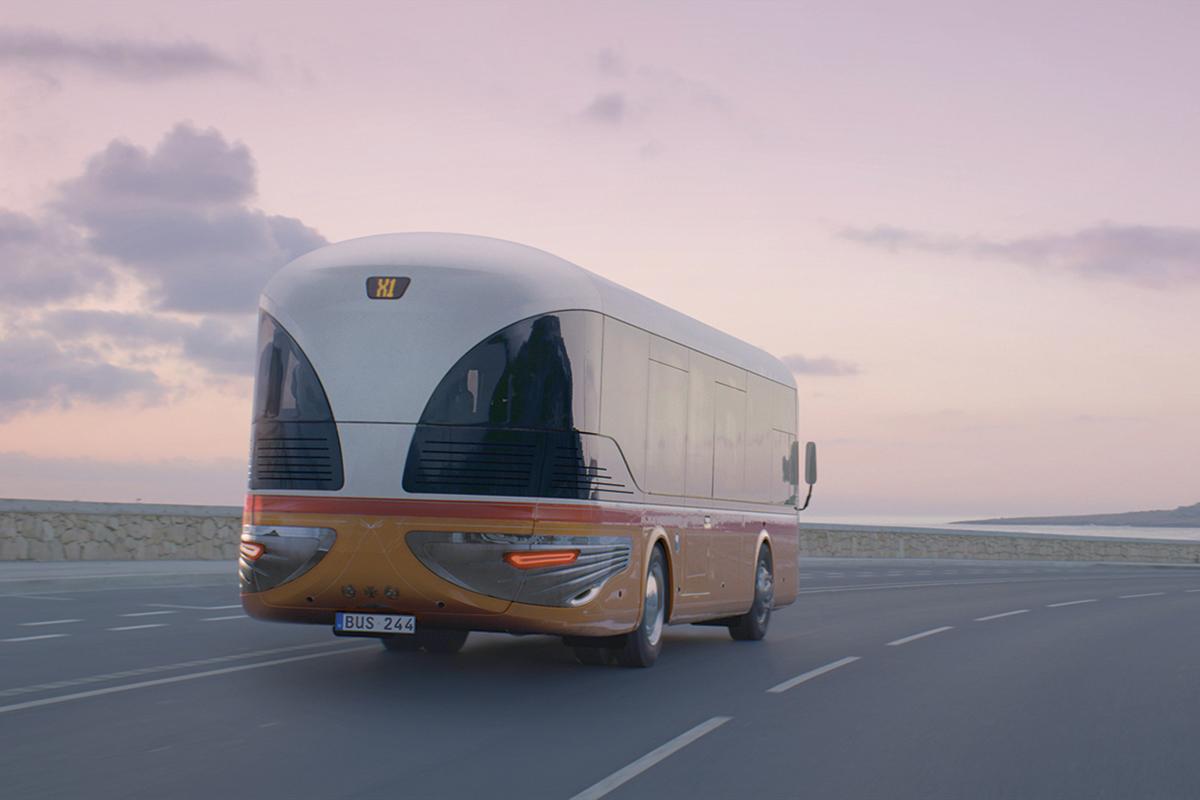 Mizzi says that organic patterns in man-made structures have proven to have a positive impact on human beings.

Their second principle is biophilia, which goes a step beyond the form of buildings and the way they look. Biophilic design looks to connect people who inhabit buildings and spaces more closely to nature.

Biophilic buildings prioritise natural lighting and ventilation, a connection to green space and, in Mizzi Studio’s case, a preference for natural materials wherever possible.

Sustainability must lead our design projects

Finally, their work also incorporates and represents an approach they have termed ‘biomodernism’, which marries nature with the principles of openness, order and access that were championed by the modernist period.

The recent, alarming UN report on climate change has highlighted the fact that the world is “living in a climate emergency” and, in Mizzi’s view, everything – from buildings to products of all scales – must be designed in the context of that emergency.

“It’s our job as architects and designers to keep abreast of the global initiatives and objectives that have been set out to mitigate the effects of global warming, climate erosion and the rapid loss of biodiversity,” he remarks. 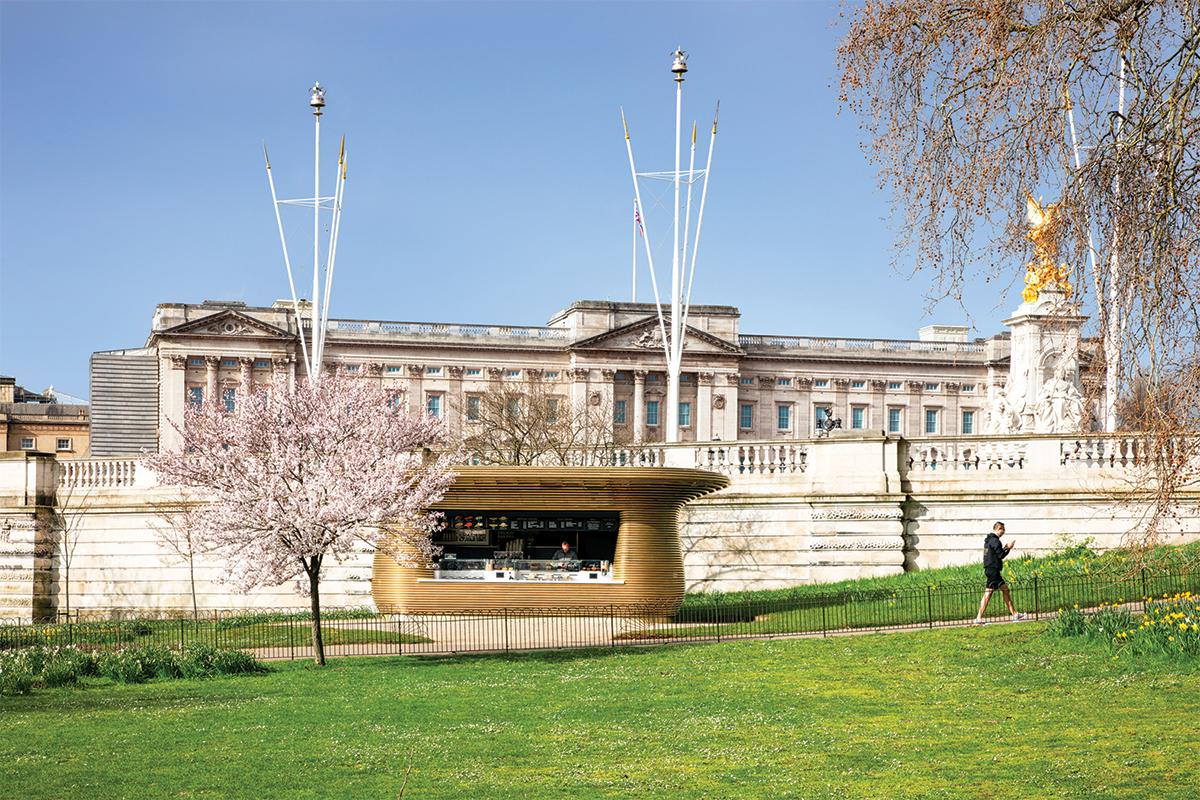 “It is not enough to tack on sustainability features to projects. Sustainability must lead our design process. We also need to use our work to spread awareness and promote change. We must be knowledgeable about all matters related to the effort to reverse climate change, all the events, initiatives and movements.”

He adds that Home Away From Hive, which will be in place until October, has been designed in the knowledge that the annual UN climate change conference COP26 will be taking place only a few weeks later (November 1 to 12).

“The summit will enable and encourage ways to protect and restore ecosystems, build defences and warning systems as well as build resilient infrastructure and agriculture that will help avoid loss of homes, livelihoods and lives. Ignoring these global aims is simply not an option – climate change impacts everyone and everything,” Mizzi stresses.

Mizzi highlights the fact that championing nature-led design does not mean rejecting or retrograding humanity’s massive achievements in technology.

“We have always celebrated the power and potential of technology. We believe technology can save us ­− it can make nature even better. What is crucial is that we find ways to use technology to enhance climate-resilient design,” he points out.

To give a practical example, he mentions that the studio uses digital manufacturing to create “bold, sculptural form with great precision”. This involves breaking up their designs into buildable parts to eliminate waste and minimise high-impact construction methods; pre-fabrication, which is a less environmentally harmful way of doing things; and using modular design elements into their projects whenever possible. Modularity helps to eliminate remoulding or remodelling, reducing the energy it takes to make buildings.

Besides, many of their projects are made from sustainably sourced timber, making use of a material that naturally sequesters carbon and that can, and is, regrown in forests that go on to become important carbon sinks. 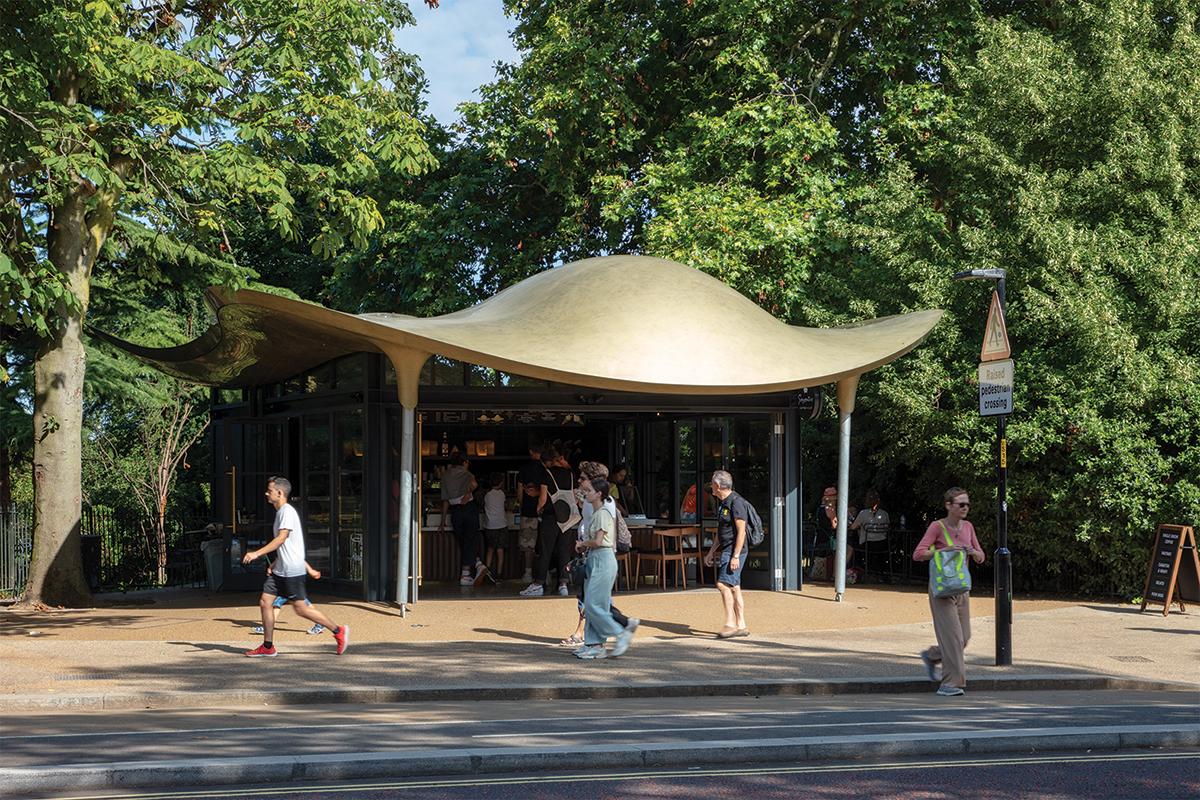 One of the most comprehensive ambassadors of all Mizzi Studio’s principles and methodologies is the work they carried out across The Royal Parks, in London, where they designed a fleet of new timber food kiosks to replace an older set dotting Green Park, Hyde Park and St James’s Park.

“Our new fleet works to a set of universal design characteristics but each structure was designed in direct response to its natural setting, with subtle changes in their form and silhouette adhering to their position in the landscape,” Mizzi says proudly.

All bar one of the kiosks were clad in naturally steam-bent timber. Their final kiosk – sited at the foot of Buckingham Palace – is clad in bronze, mirroring the materiality of nearby monuments.

All the kiosks were built using modular principles, are demountable and can be built in two major parts over a short period of time.

“They, therefore, not only use sustainable materials and non-invasive cladding techniques, they are also built on the sustainably-driven attributes of modularity,” Mizzi observes.

A vision for Malta

When looking at the context of Malta, Mizzi Studio sees heritage as an important agent for designing sustainably.

“Our approach when designing in Malta is to look closely at what has come before,  capturing the vernacular systems that have been used in Mediterranean architecture for centuries and looking to modernise them for today’s context. We believe that this sense of continuity makes sense not just as a means to champion passive environmental systems but also to promote a visual lineage.

“When people feel a strong visual link with places and buildings, they are more likely to care for them, maintain them and less likely to demolish them. This is inherently good for the environment,” the architect and designer says, while adding that their project, Barbajean, a restaurant in Dingli, worked very much on this strategy around prioritising heritage.”

A few years ago, the studio launched their concept of a new, electric Malta bus, visually based on the beloved old buses.

“We are still hopeful that this vision for more sustainable public transport will be converted into reality. We know for a fact that the public want it,” Mizzi exclaims.

In terms of future projects, the studio is interested in transport, infrastructure, agriculture and education as areas that can see radical change in terms of sustainability on the islands.

Circling back to Home Away from Hive, Mizzi says that this project is a reminder of how architecture must still function as a way to educate, entertain and provide comfort to people.

“Malta is blessed with a natural landscape that is unique and mesmerising. When you stumble upon patches of it in a pristine state, it feels like rediscovering paradise.

“We’re hopeful that projects like this can demonstrate and raise awareness around the fact that architects absolutely can build in an ecologically friendly way and, by extension, that we can make positive changes in every context we work in, including our wonderful islands.”

Independent journalism costs money. Support Times of Malta for the price of a coffee.

Wed Sep 1 , 2021
Our team is dedicated to finding and telling you more about the products and deals we love. If you love them too and decide to purchase through the links below, we may receive a commission. Pricing and availability are subject to change. If you’ve been wanting to upgrade your home’s […]