If Henry David Thoreau collected vintage license plates, would he have built a separate Walden cabin just for them? If so, it might look a little like the Moskow family’s new outbuilding in Chilmark, which rose from an empty clearing in the woods over eight very active days earlier this month.

The rustic cabin on private land was built by a team of nine architectural students and recent graduates taking part in the annual Studio North design-build retreat with architects Robert Linn and Keith Moskow.

“The footprint is the same as the Thoreau cabin, 10 by 15 (feet),” said Mr. Moskow, who comes up with a different Studio North project every year for students. In addition to providing a sheltered spot to contemplate nature, as Thoreau did in the mid-19th century, the airy one-room structure doubles as an all-weather gallery for a collection of 20th-century license plates from around the world.

A third use for the cabin, which is roofed with translucent fiberglass over a wooden framework, could be as overflow sleeping space for younger family members and guests, Mr. Moskow said.

The young builders, who hailed from across the U.S. and, in one case, from Brazil, came to the week-long retreat with assorted levels of construction experience. Haverford College student Alex Rebhun brought some handyman skills he developed while working at his family’s toy store in Wellfleet. 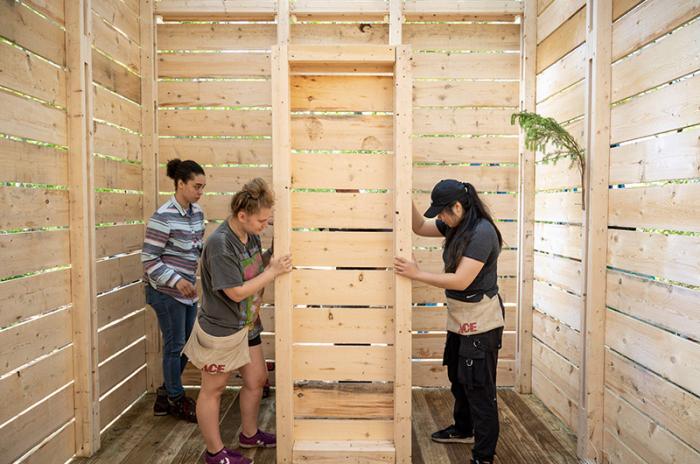 “It’s very much paper-based,” she said. “This (project) has been really helpful, just to see what happens from design to the real world.”

Rebecca Bagdikian-Boone said that after finishing the landscape architecture graduate program at the University of Massachusetts, Amherst last year, she now wants to enter the field of building design — with Studio North a key part of her plan.

“It’s so important as designers to have that hands-on experience. In person, you get a new understanding that can inform your design,” she said.

The week-long project began June 1 with a concept by Mr. Moskow and Mr. Linn, to which the students were invited to suggest changes and additions for Mr. Linn’s final design. They started construction amid fickle early-summer weather, which included extensive downpours that saw the team digging foundation holes under the shelter of a tarpaulin.

Over the days to come — sometimes stretching to 12 hours — the once-quiet Chilmark clearing rang with the sounds of hammers driving nails, power saws ripping through lumber and Mr. Moskow’s voice, pitched to carry over the din with advice and encouragement for the team.

“Another day with all the fingers,” he said cheerfully as the site shut down Saturday afternoon, earlier than usual, so the crew could hit the beach for once during their stay. 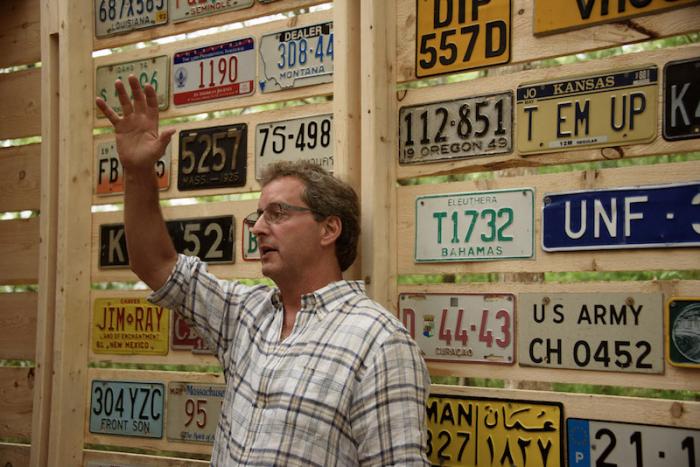 Keith Moskow talks to students from inside the cabin, decorated by license plates from around the world.

As the cabin took shape, the novice builders were led by student-teacher Kyle Neumann, a returning Studio North alumnus who assisted Mr. Moskow in supervising construction and making supply runs to Cottle’s Lumber.

“It’s one of the things the architectural education does not subsidize,” Mr. Neumann said of hands-on building projects like this one. “It really gives students a practical application for their design.”

Oriented squarely north-south in a formerly wooded spot on the Moskows’ land, the high-ceilinged cabin is almost pure structure, with even fewer amenities than Thoreau’s Walden hermitage. The walls are made simply of eight-inch boards, attached horizontally with a strip of space between each board and the next. The tall, narrow entrance, on the north side, and a matching window on the south have no casing or glass, with barn-door-style sliding panels to open and close them.

Apart from the license plates and a swing-away ladder to reach the narrow sleeping loft above the door, the cabin’s only other furnishing is a single farmhouse chair.

“Thoreau had three chairs,” Mr. Moskow said, then pointed to where one of the Studio North students had deftly mended the chair with a piece of tree branch.

Improvisation was part of the toolkit throughout the cabin project: Six-inch boards were originally specified, but not available, hence the eight-inch width. On Saturday, the team discovered the door was slightly too short and needed to have some wood removed from the top.

“Good thing we were screwing, not nailing,” Mr. Moskow observed, as crew members fetched a ladder.

To celebrate the cabin’s completion last week, Mr. Moskow threw a cook-out in the clearing and invited several local builders and architects to meet the students and offer critiques of the Studio North team’s work. Architect Mark Hutker praised the cabin’s design and construction, but objected that the building’s brise-soleil — a sort of slatted visor over the entrance and side walls — is oriented to the north instead of the south, where this type of feature is usually used to filter strong sunlight.

“I just think you ought to think about that next time,” he said. 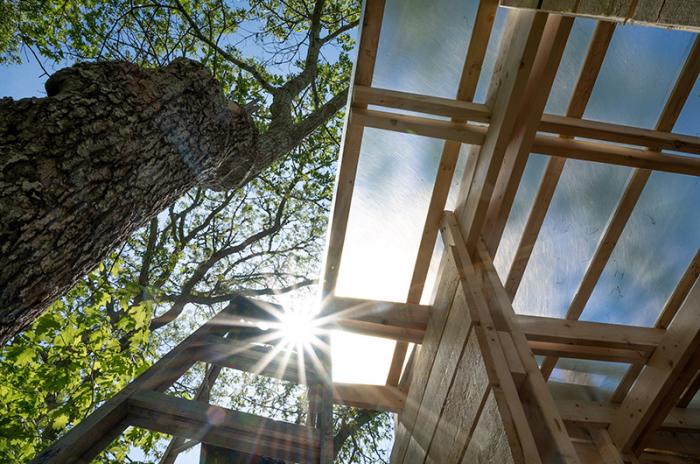 But Mr. Moskow had a good reason for putting the sunshade on the shady side, he told the group later on.

“So it really wasn’t as much about the sun, it was more . . . a way of finishing the box,” Mr. Moskow said. “It was more of an aesthetic decision. I’m glad you wore that hat, Mark.”

“I built my own house in 1976 . . . and I muddled through it,” Mr. Flake recalled. “In time, it took on a character that I could have never designed or built into it if I had known a lot more.”

“So don’t over-think this stuff,” he told the students. “Follow your heart when it comes to resolving details in the field, and think about what really sings.”

Fri Jun 18 , 2021
They say big things come in small packages! And I could not agree more. Sometimes the most inconsequential-looking products can be packed with a whole load of utility. And this is certainly true in the case of kitchen appliances. Space constraint is a major issue in our modern-day cramped kitchens, […] 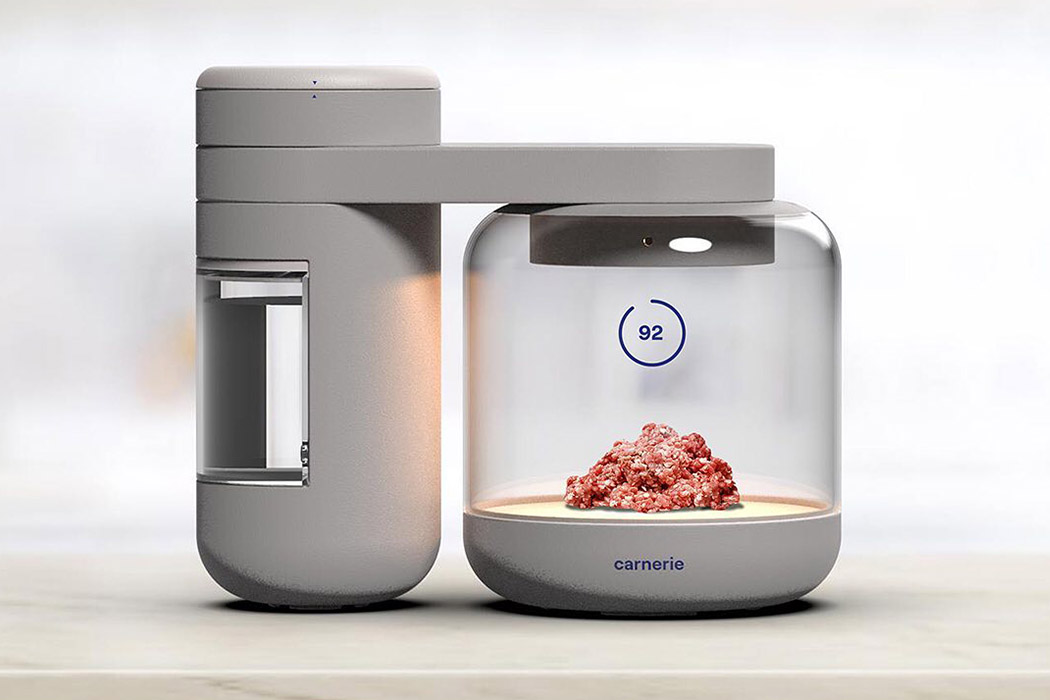