As hard as it is to believe — for me, at least — Marcia and I have now been writing our Homes & Gardens column for 10 years.

The time has gone by in a blur of beautiful gardens and nurseries, amazing, visionary people and countless do-it-yourself projects.

But the one constant in it all, the icing on the cake of this job I’ve been privileged to do for an entire decade, is that I have gotten to experience it side by side with my very best friend.

Marcia and I have welcomed three more grandchildren, bringing the total to four, and said tearful farewells to five wonderful pets.

We’ve torn down two beloved structures in the garden (and replaced one), almost completely rebuilt our front porch, all but eliminated our front lawn, redone our kitchen countertops and island, come up with at least 30 ways to write about Easter and Halloween and Christmas and replaced our worn carpeting and flooring downstairs.

OK, we still haven’t gotten around to that last one despite taking a how-to class five or six years ago. But we will.

All this while writing something like 250 or so columns for the Homes & Gardens section, the first one featuring a brick addition to our neighbor’s front steps.

Over the years, the neighbor moved (just a coincidence) and we expanded our subject matter from inexpensive do-it-yourself projects to writing about larger projects and gardening, in the process meeting some truly amazing people involved in gardens and nurseries in the region.

And the gardens we have been privileged to see will stay with us forever.

Of course, it hasn’t all been peonies and dahlias. We — especially Marcia, while I was still working — have been hard-pressed at times to finish several projects by deadline.

And I became too familiar with goodbyes to co-workers — the last one my retirement a year ago on Zoom — as The Oregonian, like every other newspaper not owned by Jeffrey Bezos, tightened its belt.

But this is supposed to be about homes. And gardens. So here are some of the highlights for me — as often as not, the amazing people we interviewed — from a decade of columns.

Outside of kids and grandkids, plant people are my favorite, bar none. You will never find a more generous, giving, enthusiastic group anywhere.

Some that stand out:

Burl and Cindy Mostul, Rare Plant Research and Villa Catalana: We got to know them because of their unique plant selection, and we stayed for the wine they make and sell at their one-of-a-kind, hand-built stone home/winery.

Marietta and Ernie O’Byrne, Northwest Garden Nursery: The care these two bring to their Winter Jewels hellebores (propagating with paintbrushes) is just one reason their plants are so coveted.

Lory Duralia, Bosky Dell Natives Nursery: A true force of nature and a tireless advocate for the advantages of native plants.

The guys at Potted Elephant: While it’s true that the majority of nursery owners and gardening aficionados are closer to my age than to our children’s, the three young men — Cory Paul Jarrell, John Heckel and Adam Aguilera — are at the crest of the wave of interest in indoor plants, a favorite of younger people.

Sarah Smith, thegardensmith.com: A landscape designer and garden consultant, Smith was generous with her time in sharing her pickling and tomato-growing skills.

Fallen arch: We wrote about the garden arch that Marcia painstakingly built in 1995 when we refurbished it in 2014, which bought it an additional five years until it became too unstable to leave up.

Fallen gazebo: The unique structure, made up of madrone logs and topped with a metal dome and a gorgeous blue glass ball, was the visual centerpiece of the back garden. It fell victim to woodpeckers, but we were at least able to reuse the dome and glass ball in a new gazebo on the same spot.

Falling porch: The year 2015 was — for us — all about the porch from hell, which had issues that could have become catastrophic at some point. Doing almost all the work ourselves, it’s now sturdier than it ever was before and looks great.

THE COULD LOOK BETTER

Kitchen cabinets: We had them dipped, we sanded them, we stained them. They looked great. That is, until we realized we should have sealed them after they were dipped because some of the dipping chemical came to the surface and left marks.

Now that we know what we did wrong, we’ll tackle them again this summer.

In the past 10 years, we’ve put in a new cooktop and wood countertop on the kitchen island, installed a new backsplash to go with new countertops elsewhere in the kitchen, redone the upstairs bathroom (actually, daughter Madeline did 99% of that), poured three highly decorative concrete steps leading to the crushed rock patio, installed raised vegetable beds and refinished two different tables for the kitchen nook, among many, many other projects.

Buster: Our now-11-year-old cat made his H&G debut in a 2013 column about natural dyes for Easter eggs, which to date is still our most popular column online (because of the cat, no doubt).

Grandchildren: Oldest grandson Sam (now 14 and close to 6-feet tall) was the first to make an appearance and his 8-year-old twin siblings Lily and Henry have as well, but Noelle, also 8, since she and her mother live with us, has shown up the most often.

Daughter-in-law Dawn: An ardent plant lover, she’s written five columns for us over the years.

Daughter-in-law Andie: Andie contributed columns on worm bins and basket making and has appeared in several other columns as well.

It started out a decade ago as an invitation from the Homes & Gardens editor (Peggy McMullen) to write an occasional tips list which morphed into weekend projects that cost $200 or less.

Eventually we started writing about whatever project we were doing, whether it was large or small, long or short term, which was usually budget friendly and definitely DIY.

The challenge with a column that runs every two weeks has been to finish the project within that timespan. We got to the point that we had a hard time finishing the current project before the next column was due. Since I’m a landscape designer by trade, we started interspersing related subjects in between projects to give ourselves more time, which turned out to be Kismet!

It’s now our favorite part of the column. We’ve met the most inspirational people: visionary, artistic, knowledgeable risk-takers who all took a chance. I wish I had the room to name every one of them! They started nurseries; designed gardens; bred plants; created pots and metal sculptures; built baskets and houses; grew and preserved veggies; and created rock walls that are works of art, to name just a few.

They introduced heucheras, grasses, hellebores, natives, kiwi berries, lavender, cacti, succulents, xeric plants and so much more to our gardens.

It became an extended family affair and all kinds of fun when our daughter and daughters-in-law added their writing, talent and expertise to many of our columns. And sometimes, grandkids and pets were encouraged or insinuated themselves (I’m looking at you, Buster) into our photos.

As anyone who knows me knows, I don’t like having my own picture taken (I’ve perfected the panicked look of a deer caught in the headlights.). I quickly figured out it was better to be behind the camera instead of in front of it.

That doesn’t mean I know the ins and outs of my camera, though. I just set my Nikon on automatic, take about 500 photos and hope for the best.

I usually edit them down and submit about 36 photos per column to our wonderful editors and page designers, who then perform their magic.

Dennis and I don’t see the finished column until you do, when it appears in the newspaper and online.

It’s hard to pick favorites, but two columns I especially enjoyed writing were about taking down our old rose-and-clematis-covered arch that had stood watch over our garden since our kids were little and another titled “Bad kitty bouquets,” which was inspired by my need to create a flower arrangement that couldn’t be knocked over by our cat, Buster. There was also a column titled “Know the signs — and symptoms — of a Northwest spring,” which was just silly.

Some of my favorite DIY projects were refinishing our old music cabinet, finding and refurbishing a pedestal table from ReStore, finally finishing our mantel, re-caning granddaughter Noelle’s great, great, great grandma’s rocker, painting flowers on my office wall and, most recently, building a floating desk and shelves in our bedroom nook (for which I found the most wonderful 70-year-old leather chair at ReStore, unfortunately after the column ran).

And, of course, anything involving stone mosaics, whether they are steppingstones, decorations on the top of pots or our firepit patio. I enjoyed making them all.

Some of my favorite moments were the same as Dennis mentioned earlier and also seeing the gorgeous gardens on the annual ANLD tours, watching Chris Randles of Athyrium Stone & Garden build a rock wall, metal artist Ben Dye’s goats sitting on chairs watching him weld, Farah Ramchandani’s compelling life story, getting to work on and learn anything with Good Neighbors Al and Cathie and, last but least, Weird Uncle Gary and his garden gnomes.

My favorite photos were of Buster laying on a towel with naturally dyed Easter eggs, our granddaughter Noelle sitting in a chair when she was about 1-year-old, dressed in a black-and-white polka-dot bathing suit and our daughter-in-law Andie in the lavender fields.

The beauty of the flowers speaks for itself.

And for those who noticed (Thank you!) we haven’t been writing quite as often recently, we’ve decided after 10 years to slow down just a little and write our column once a month, which gives Marcia more time to focus on her landscape design business and Dennis more time to, uh, well … (Marcia: Be retired?)

I’m go grateful and honored to have had the opportunity to share our family and the amazing people and places that have filled these pages over the last 10 years!

The one constant in it all, the icing on the cake of the job I’ve been privileged to do for an entire decade, is that I also have gotten to experience it side by side with my very best friend.

I feel grateful beyond words!

— Marcia Westcott Peck is a landscape designer (mwplandscape.com or find her on Instagram at @pecklandscape or on Facebook by searching for “The Pecks”), and Dennis Peck is a former senior editor at The Oregonian/OregonLive.

How to optimize your air conditioner's efficiency amid heatwave

Sat Jun 12 , 2021
article Cleaning off your air conditioner with the hose can help optimize efficiency. (FOX 9) (FOX 9) – On these hot and humid days, our air conditioning units are working overtime. From inside the home to outside, there are things you can do to keep your family nice and cool. […] 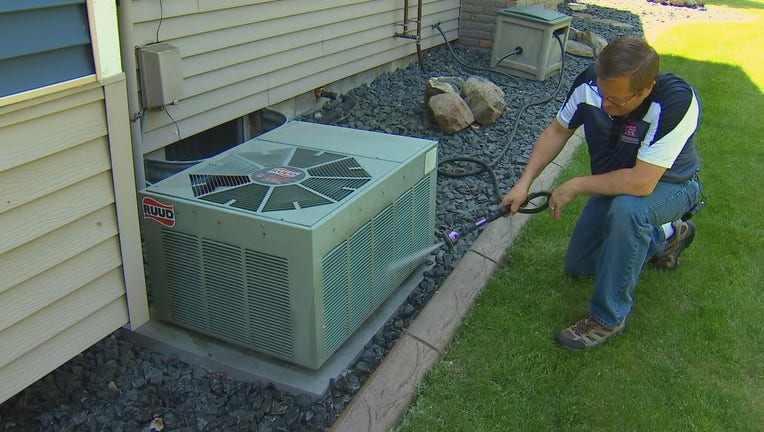