Design studio Rationale International — Masanori Design Studio has created an office in China with a curvilinear facade and undulating ceiling that draws on the qualities of fabric.

The Chinese studio drew on the process of cloth production and interpreted the movement of textiles through an architectural language to create the design.

“Producing three-dimensional visual effects and realizing the unity of interior and exterior.”

Built for a fabric production company, the Runxuan Textile Office is located in a textile town in Foshan in the Guandong province of China.

Its exterior was clad in vertical aluminium battens arranged in a curvilinear formation that extend above the building’s windows.

The aluminium battens stretch through to the interior of the office across the ceiling, mimicking the rolling form of the facade to connect the interior and exterior.

“In this space, one seems to be standing under a loom,” said Xu. “The ‘yarns’ are interwoven with the light, and such black and white colours form artistic scenes from different angles.”

“For example, the undulating ceiling gives the space a strong sense of architecture,” said Xu.

“Meticulous details, connection between ceiling and walls, columns, and play of light and shadows, bring various changes to the space.” 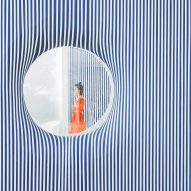 The lobby was placed at the centre of the plan, with offices, meeting rooms and conference spaces organise around it.

White was used throughout the interior of the building, which has a minimalist aesthetic with furniture, decorative objects and plants sparsely placed in the space.

Offices have been fitted with artificial skylights that stretch across large parts of the ceiling to combat the interior’s lack of natural light.

“By optimizing the indoor functional layout and solving its lighting and ventilation problems, it created a healthier and more comfortable office, which became another feature of this project.”

Founded in 2017, Rationale International — Masanori Design Studio uses nature, balance and brand identity to create spaces that are not limited to a specific style.

Other recent Chinese projects include a visitor centre with a striped wall and circular windows by Wutopia Lab and a recycled brick podium that envelops a campus containing three-striped office blocks by Neri & Hu.

Photography is by Yun Ouyang.

Appliances, Furniture & Mattresses Are Deeply Discounted for the 4th of July & These Are the Best Deals

Sun Jul 4 , 2021
There’s a lot we love about 4th of July weekend, from having family cookouts and gorging ourselves on burgers and barbecue to watching fireworks and having a day off from work. Oh, and shopping. That’s because every year there are huge fourth of July appliance and furniture sales at our […]