Henry Ware said it was the power of prayer that got his family through the last three years.

The Port Arthur man and his family have experienced an unbelievable string of tragedies since Hurricane Harvey destroyed their home in 2017.

But the tears they cried in the door of their home Thursday were purely from joy as American Air Systems showed up and surprised them with a brand new heating and air conditioning system.

It was something they’ve been without for the better part of four years.

“(Our son) just turned 10,” he said while standing in front of a truck holding his new HVAC unit. “He tries to be strong. But his hair is short, so you see the back of his neck is sweating.”

The Ware’s have been living in their home with only one small window unit in the living room. But it was a living room they didn’t have until a couple of years ago, when the Southeast Texas Emergency Relief Fund stepped in to help with repairs.

“They’ve lived a nightmare,” said Executive Director Ann O’Bannion, who nominated them for the American Air Systems giveaway. “They’re the most upbeat, most thankful and very appreciative. It just makes you want to give them the moon.”

Lee Potter, owner of American Air Systems, said this is the third time they’ve awarded a Southeast Texas family with a new unit. The Wares were one of 117 families nominated and chosen by an independent committee of community leaders that handles the contest applications.

“Southeast Texas has been great for us,” Lee said right before the reveal, which included members of SETERF, city and county leaders, and a host of other organizations. “And we decided it was time to give back.”

He was unaware of the family’s story prior to arriving at the house.

“I have yet to read any nominations,” Lee said. “Because it is such a cool thing to do, I’ll be too emotional if I know.” 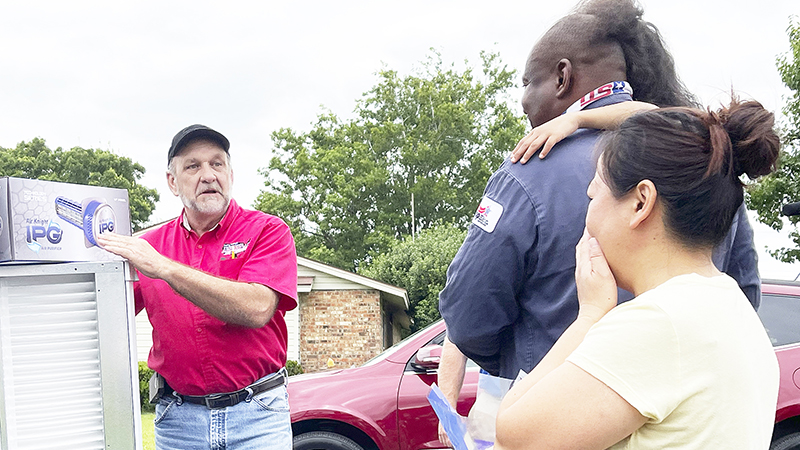 Prior to Harvey, Henry worked at a refinery and Susie worked as a nurse. They had three small children, the youngest being only 9 months old when the storm dropped record rainfall on Southeast Texas.

They had flood insurance and hired a contractor to make repairs, but became the victims of contractor fraud.

“The brick was not damaged, but just out of meanness the contractor stripped all the brick off the wall,” Ann said.

The house had been stripped of everything, since the contractor knew the family had to make weekly trips to MD Anderson Hospital in Houston.

Susie had just been diagnosed with cancer and could no longer work.

With no real home, the family spent a year living near the hospital in their Chrysler 300 — the parents sleeping in the front two seats, and the children sleeping in the back seat.

But from that, Henry developed a foot infection that rendered him unable to properly walk, much-less work, and he too became unemployed.

Eventually they were able to get a FEMA unit to live in, but the day FEMA took it back, the trailer caught a wire and set the house on fire. The home, however, was not destroyed.

They moved back in, but mold in the house caused complications with Susie’s recovery. She was living with tubes that helped drain her lungs.

Everything had to be removed and replaced.

“She was getting depressed and feeling like it was her fault,” Henry said. “She felt everything was because of the cancer.” 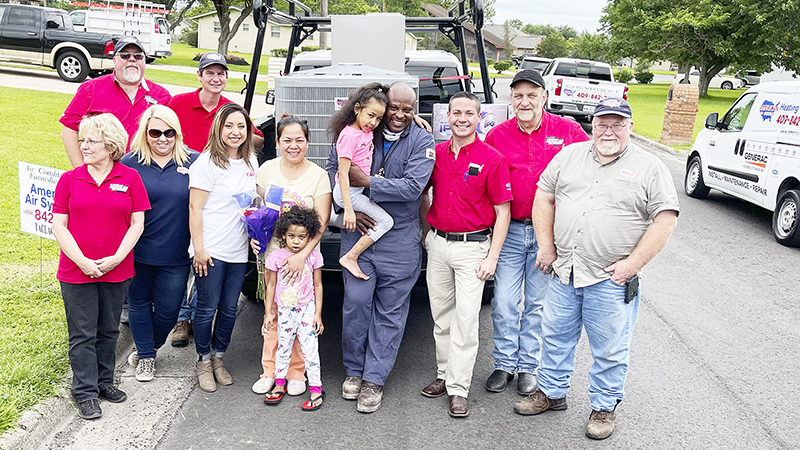 The Wares applied for years for assistance with every organization they could.

And through that process, they found SETERF. County Commissioner Vernon Pierce, who was in attendance for the HVAC system surprise, was the organization’s director at the time.

Ann said the organization was able to provide funding for labor, but not supplies. Those were donated by Habitat for Humanity.

At first, they had only enough to build a living room, kitchen, bathroom and bedroom. But as additional funds came available, they continued work on the home.

They were able to get siding to replace the brick, and over Spring Break had a group of young people volunteer to paint it.

At Christmas, a church group offered to sponsor the family.

“I called and he said, ‘Oh that’s great, because Susie is having to sew holes in the kids’ underwear,” Ann recalled.

The unfinished floors were also putting holes in their socks.

When Ann saw the contest from American Air Systems, it didn’t require a second thought.

“I thought, ‘Oh, this is perfect,” she said. “I don’t have anything to lose by submitting it.”

A central unit was the last thing they needed. But the house had to be equipped with the necessary wiring and duct work for the system.

But once again, SETERF found the funds to make the additions.

“This will completely recover them,” Ann said.

Prior to arriving at the Ware’s home, American Air System employees, committee members, SETERF representatives and others gathered at the Market Basket on Old Port Arthur Road so they could all arrive together.

“Thank you for taking the time out of your day to go celebrate changing a family’s life,” Lee told the crowd. “This is what it’s about. We are fortunate enough — with my company and the crew that we have and the work that we do and the sacrifices that they give — that we get to do this.”

He led the group in a prayer before leading the caravan of vehicles to the house.

Two young girls peeked through the blinds as people began to park vehicles and fill their yard.

Lee knocked, greeted the family, and let them know they had won a brand new air conditioning system.

“We’ve heard it’s been a struggle,” Lee told them. “It’s time for it not to be a struggle. It’s time for you to come home and enjoy the Southeast Texas comfort. It’s our honor to be able to give you this that in the next coming week or so, you’ll walk in and say, ‘Oh it’s cold in here.’”

Tue May 18 , 2021
Etsy It’s that time of year when family gatherings move outdoors, whether it’s planning a quick and easy dinner, movie night or a fun day filled with backyard games. To kick off the warm-weather season, Etsy just announced its very first Outdoor Sales Event, which includes major discounts on just […]