Pandemic realities have drastically changed the way art is viewed. Typical white walls of gallery and auction events were replaced by screens, and the confines of the museum were replaced with the great outdoors. But this sudden shift meant that nature and art quickly adapted to become one in the same. Around the world, three exhibitions shared this message: “La Mer imaginaire” at the French Villa Carmignac through the The Fondation Carmignac, Maya Lin’s “Ghost Forest” in New York City at Madison Square Park, and “Every Wall is a Door” at Superblue Miami. They are a roadmap to a world increasingly impacted by climate change, and their singular message cannot be ignored.

In France, “The Imaginary Sea (La Mer imaginaire)” captures this most poetically.

“It is often said that we only recognize the value of something once it is gone,” according to a statement. “This exhibition invites visitors to explore this concept.”

The showcase is an experiment in whimsy as much as environmentalism, using childlike wonder to reflect on the majesty of the surrounding natural world. Housed at the Villa Carmignac on the remote forested French island of Porquerolles, the building notably features an underwater ceiling, a mirror for the surrounding seascapes of the Mediterranean. Immediately, by virtue of entrance, the viewer is welcomed into the sensation of being in the ocean.

American curator Chris Sharp was approached to reflect his love of animals and nature through the villa’s incredible architecture. In turn, he explored the many narrative dichotomies of his artistic roster: between joy and ephemerality, culture and nature, timeless artistic ideals and the earth’s fragile beauty. 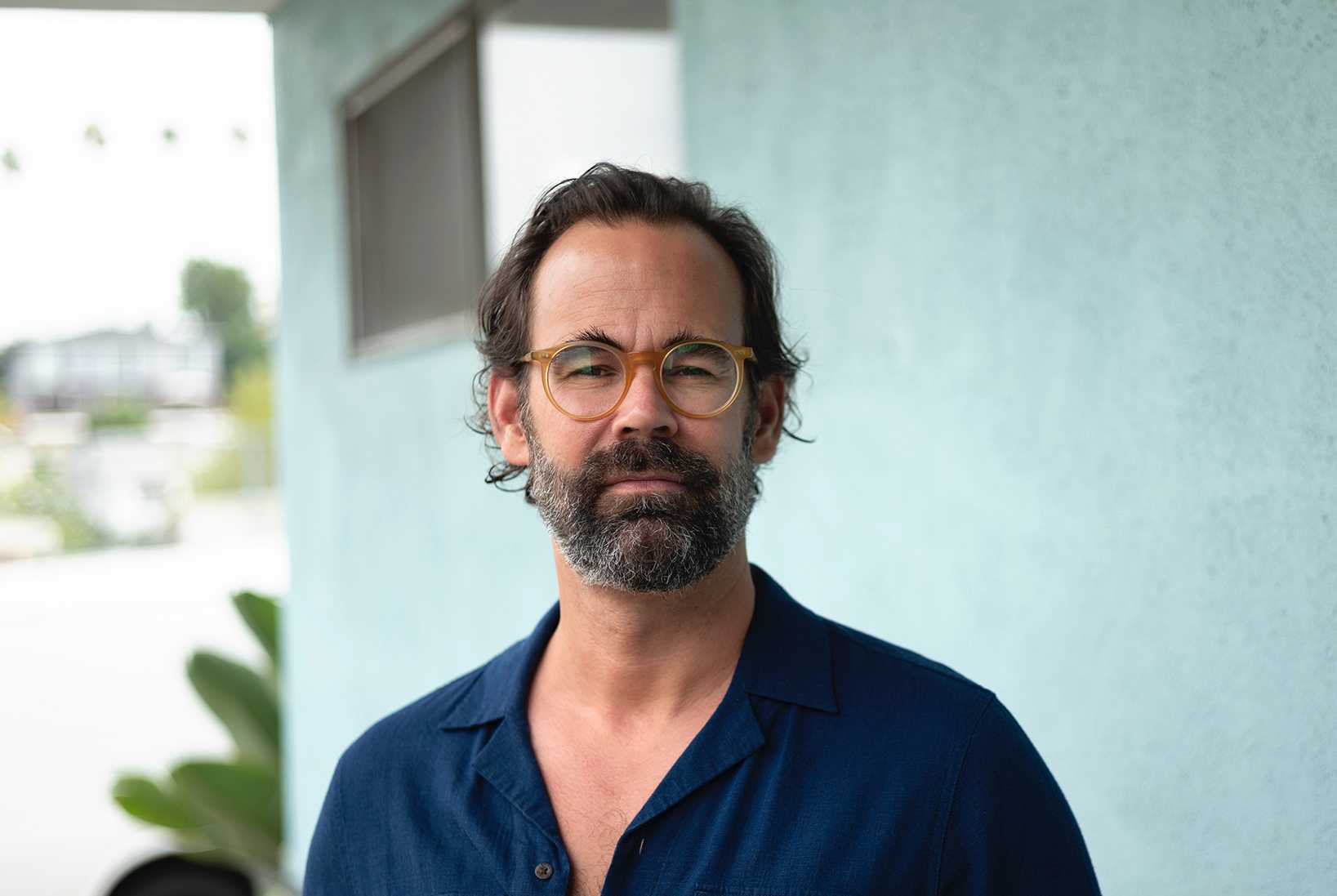 Speaking of the show from Los Angeles, Sharp tells Observer, “It is looking at how the sea becomes this seemingly inexhaustible source of inspiration. The title of the show is, “the imaginary sea,” because, in other words, it reflects how the sea actually impacts the imagination.”

Even the curator had not heard of the island before he was approached by the Carmignac family to work on what is only the villa’s fourth exhibition. A 10-year veteran of the French scene, Sharp was eager to blend contemporary artists such as Jeff Koons and Gabriel Orozco, with the rich history of the villa and the South of France. He was sure to include works by Paul Klee, who visited the villa, as well as Henri Matisse and Dora Maar, who each profited from the pristine blue beauty of the Cote d’Azur.

And yet, Sharp addresses the reevaluation of our relationship to the natural world. He believes the 20th century was marked by a “cavalier disregard,” thus weaving the joys and tragedies of this changing narrative. The result is intended as a sort of active conversation with viewers of all ages, operating from a multiplicity of perspectives.

The result is mystical. Haunting underwater photographs by German 63-year-old biologist-turned artist Jochen Lempert experimented with shadow and light, casting a tragic lens on global warming of oceans, not unlike diver Nicolas Floc’h elsewhere on the property in a showcase called Parallèlle. There is Lempert’s intense study of the seahorse, Shimbaku’s video piece of the same creature, and French biologist Jean Painlevé’s dragon leaf species, completely camouflaged into its surroundings.

“I feel like there has been this kind of interrogation around the idea of the separation of nature and culture, and how damaging this is,” Sharp explains, “How this fundamental philosophical concept has permitted us in Western human civilization the right to exploit resources and indiscriminately destroy the natural world. I think this is something a lot of artists (at least, who I’m aware of) have been thinking about, even before this general paradigm shift.”

The pandemic interplayed with the ability to experience the powerful message of the showcase. Only 50 viewers are permitted in the show at once, with cars banned from the island. Coupled with travel restrictions and extended lockdowns, it was initially exceedingly difficult for non-natives to visit the show. Even Sharp had to install the show from the United States via Zoom, waiting for nature to heal. 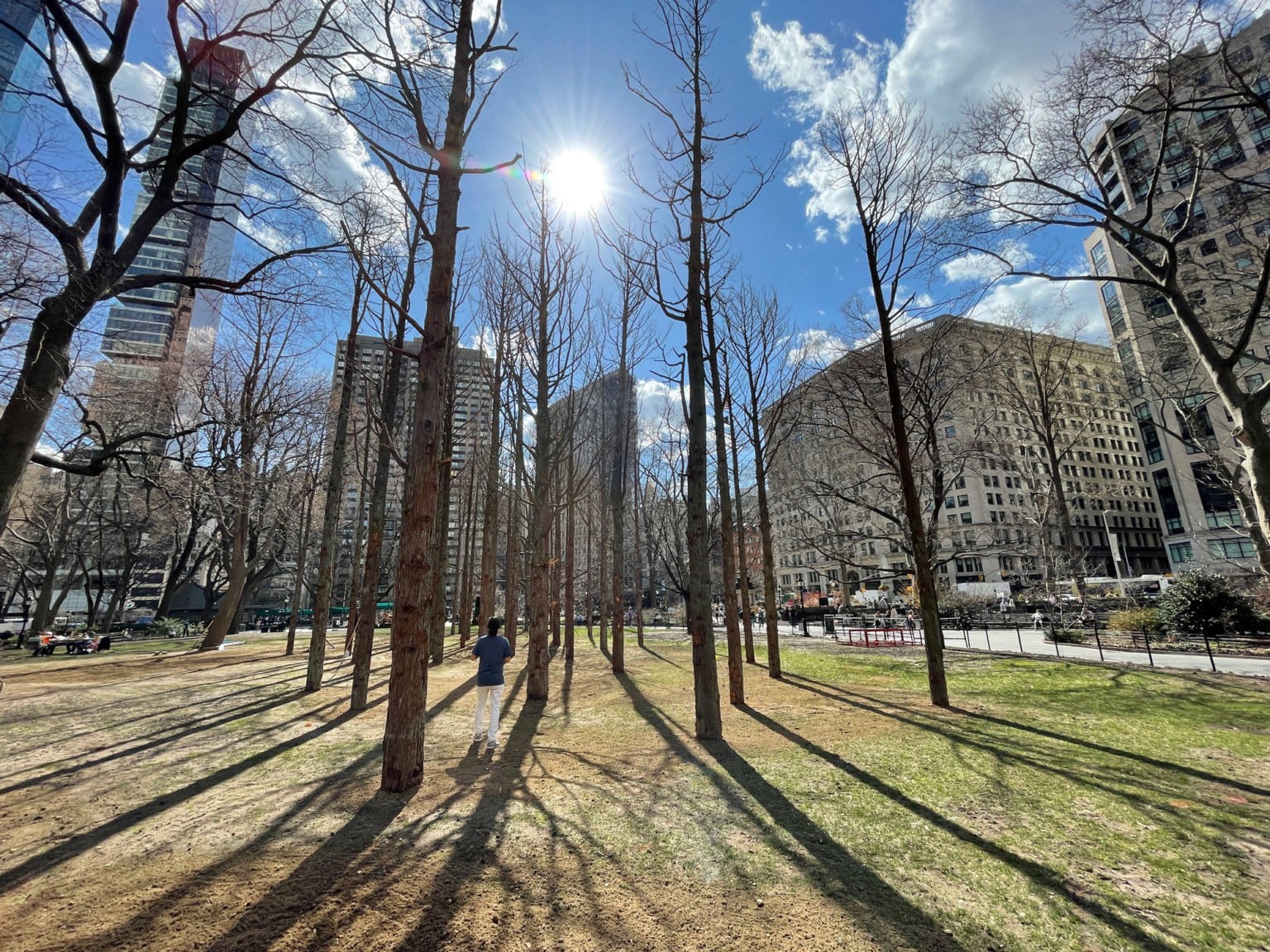 But while the French honor the ocean’s ghost from afar, Maya Lin at New York’s Madison Square Park highlights the forest from the heart of New York. The title of the single-work showcase, “Ghost Forest,” derives from what becomes of misused trees due to fires, damage, or high-powered winds. Because the elements themselves are weaponized, their natural world suffers. Unsustainable logging practices increase the impact of climate change, and the 49 dead Atlantic white cedar trees from New Jersey’s Pine Barrens remind the viewer how precariously placed their natural habitat has become.

“Artists are confronting perils related to environmental justice: Anticipation of another looming pandemic due to climate vulnerability and concurrent issues of global migration, political turmoil, food distribution…,” she continues. “Certainly, Lin’s Ghost Forest — on view in a public park in New York City with thousands of daily visitors — is advancing increased attention and opportunity for activism on climate.”

In the bustling park, a stone’s throw from the central Shake Shack, quiet, moody trees and their carefully curated noises demand reflection. Each precious tree stands over 40 feet tall in a soundscape of native animals no longer present. The showcase acknowledges that the park was taken during a genocide of the Lenape (Delaware) tribal homeland, including their respective native names for the sounds of Elk, bears, cougars, dolphins and seals among others in partnership with the local Lenape Center.

The driving force behind the show is regeneration. The dead, endangered trees were cleared from New Jersey with the hopes of restoring the environment. Throughout the showcase, public programming encourages longer-term nature-based solutions to climate change, and an effort to plant 1,000 new trees and shrubs is partly sponsored by Natural Areas Conservancy. Taking a cue from the Earthwork artist movement begun in the 1960s, they invite the public to share ideas on climate change by responding to the question: “How has climate change altered your daily life?” 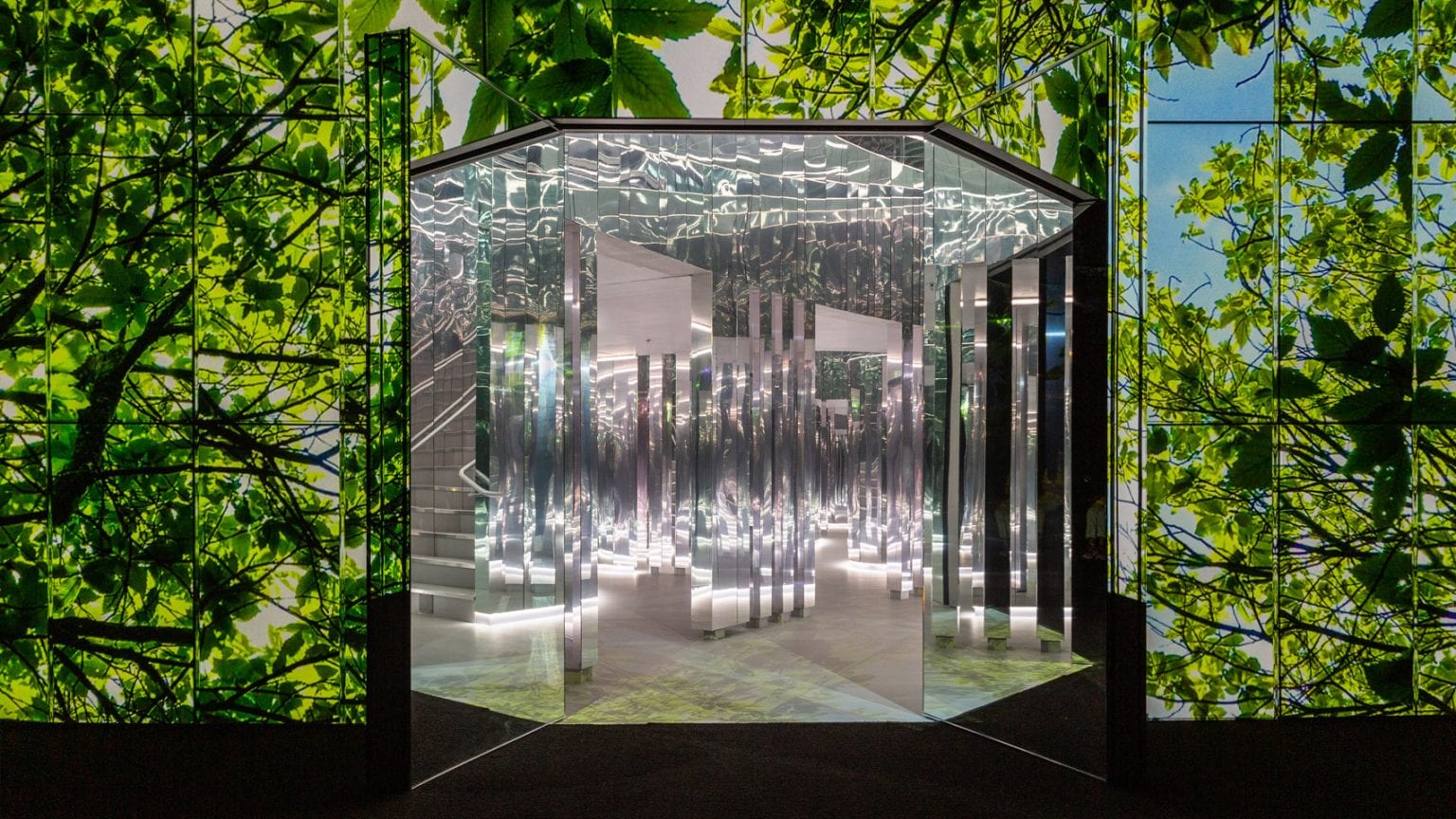 Es Devlin, Forest of Us, 2021. Installation view of Every Wall is a Door, Superblue Miami, 2021. Photo by Andrea Mora

Participation continues to be the driving force of her Forest of Us installation at Superblue Miami, across the street from the Rubell Museum. Artist Es Devlin OBE recognizes the tense duality between the digital and the interactive in the 5,000 square foot immersive museum space. As a set designer, Devlin has used her talents to enthrall stadium goers for Billie Eilish and Kanye West concerts, but “Forest of Us” underscores the same meditative quiet prevalent in the other exhibits.

Symmetrical and serene, bronchial trees highlight the work of nature. The piece, like real trees, exchanges oxygen for carbon dioxide in the lungs and vice versa, over and over, mimicking the biological cycles of forests.

The use of a ‘hall of mirrors’ is intended as a distraction for the participant, deliberately clouding their awareness of nature and the space. Devlin uses this as part of an eco-philosophy, urging the viewer to stay attuned to the earth.

And yet, the highly digitized art space harnesses the power of technology. Es Devlin OBE’s piece is a part of a greater inaugural exhibition at Superblue Miami called “Every Wall is a Door,” also featuring James Turrell and teamLab. An adjacent work by the celebrated James Turrell, AKHU (a German world for “complete field,”) features a room with Turrell’s signature monochrome lighting, disorienting the viewer with an objectless, light-filled space. With teamLab’s Between Life and Non-Life and Clouds, CG animation and computer programming to continue the cutting-edge technologies’ ability to continue to illuminate ecological issues.

Ultimately the immersive installation promises to reinvigorate the digital imagination by surrounding the viewer with all of its possibilities in three-dimensional spaces, interloping it with augmented and virtual realities. Superblue’s press release refers to the showcase as ‘experiential art centre’ with a plan to expand them across the globe.

Above all, the rallying cry is one that celebrates the mysteries and majesties of the ocean, the forest, and the world within us, as each desperately needs to be protected to prevent further crises. Perhaps, the silver lining of the tragic years behind us is a sense of artistic awareness of our own spaces. What comes next is only up to us. 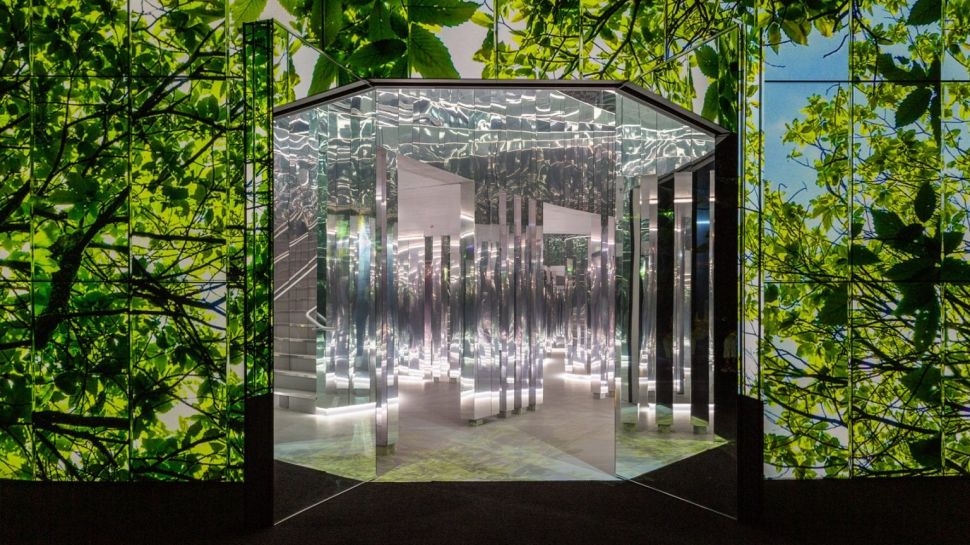 Cleaning products for the home often start with pine oil

Mon Jul 5 , 2021
While pine-based cleaning products aren’t anything new, most people don’t realize they’re among the most functional cleaning products to have on hand, even when it comes to sprucing up your hardest-to-clean items and spaces. In a recent national survey by AlEn USA, consumers said that bathrooms and kitchens are the […]