Detroit — City officials are investigating the cause of a power failure at a recently upgraded Detroit pumping station during historic weekend flooding that resulted in sewage backups for thousands of homeowners.

The Detroit Water and Sewerage Department told Detroit City Council Tuesday that it intends to bring on an independent engineering firm to evaluate how the Conner Creek pumping station was operating and the conditions that existed when Detroit was hit with more than six inches of rainfall over a five-hour period overnight Friday and into Saturday morning.

Since then, Brown added, $30 million has been invested into the station “to rebuild those pumps and those pumps worked as designed.”

There was a two-hour period of time over the weekend however when the power was lost.

“As soon as power was restored, the pumps immediately started pulling water off of the streets and out of basements, unfortunately, the damage was done,” Brown told council members during a presentation at the start of Tuesday’s formal session. “It’s just based on the sheer volume that the system could not manage. It was exacerbated by the pumps being down for the two-hour period of time.”

The firm selected to conduct the review, Brown said, will report directly to the Great Lakes Water Authority Board of Directors.

Navid Mehram, chief operating officer of wastewater operating services for GLWA, said in a Tuesday statement to The Detroit News that it’s not uncommon for unanticipated operational issues with an event of this magnitude.

“There was a brief period early in the rain event on Friday where the Conner Creek Pump Station experienced a partial disruption in service; at no time was the pump station off-line,” he said. “The GLWA team worked quickly to make repairs and the pump station was returned to full operational status in under one hour. Even with this partial disruption, at all times there were pumps running throughout the system.”

GLWA has begun a review to examine the regional system’s response, Mehram said.

“More rain fell within 13 hours than typically falls during the entire month of June,” Mehram added. “…the system functioned to its design capacity, the amount and the intensity of the rain received would have overwhelmed any combined collection system.”

Debra Pospiech, DWSD’s chief administrative officer and general counsel, said although the facility serves about one-third of the city, officials haven’t found any local system defects that would merit DWSD itself having to pay out a claim.

District 4 Councilman Andre Spivey told DWSD officials Tuesday that it’s concerning to impacted residents that DWSD has found no cause, even for the two-hour period.

“Something has to give there,” he said. “The only silver lining, if there is one, is that this happened in the summertime and not the winter when people don’t need their furnaces.”

Detroit wasn’t the only GLWA customer community that was affected, DWSD’s Deputy Director Palencia Mobley said, adding that Dearborn, Grosse Pointe Park, Harper Woods and others that are customers of the regional authority and were “affected heavily.”

Council members pushed back on the assertion from Brown and Gov. Gretchen Whitmer that the flood was partially caused by global warming and urged the department to come up with solutions to prevent future catastrophic events.

Whitmer made multiple stops Monday in the hard-hit city two days after she issued an emergency declaration for Wayne County and submitted a request for a presidential declaration of disaster. The review will require the Federal Emergency Management Authority to evaluate whether disaster conditions exist and the decision will rest with President Joe Biden.

The governor said the circumstances in Detroit and other surrounding communities result from “decades of underinvestment in our infrastructure” and “we’re not alone.”

Donna Northern, Detroit’s emergency management coordinator, said engineers are working to complete the application and a cost-benefit analysis for the FEMA review.

“FEMA is seeking comments from us now, just as we speak, and we will be expressing our disappointment with how complicated the application is and how challenging it is for anyone to even complete to be considered for grant funding,” she told the council.

“We’ve sent out 32,000 letters to residents saying your lateral sewer line has failed and it’s your responsibility to fix it,” Brown said. “And we know less than 10% of the people have been able to do it because of a funding issue so there are dollars that need to be allocated for home improvement and let us not forget the plumbing issues in the home.”

Brown said Tuesday that the department has had more than 14,000 calls reporting flood damage, the most from Districts 4 and 7.

City crews are assisting residents impacted by the flooding, including in East English Village Tuesday afternoon.

The department has 37-member call center and has tapped Quicken Loans’ call center to aid the hotline. Quicken has committed 64 additional call takers, but Brown said he is asking for 100 to reduce wait times from one hour to less than five minutes.

“It takes time to build capacity for a disaster of this nature, and I hope that everyone will understand and be patient for just a couple of days,” Brown said.

Residents can also file an online claim at detroitmi.gov.

Sun Jul 4 , 2021
Alpine Fire Marshal Jason McBroom stood in the backyard of Art and Beth Puls’ Crown Hills home on the last Friday in June and, overlooking the sweeping mountainous view from their back porch that might otherwise be cause for comment, instead talked about homeowner risk factors that could prove significant […] 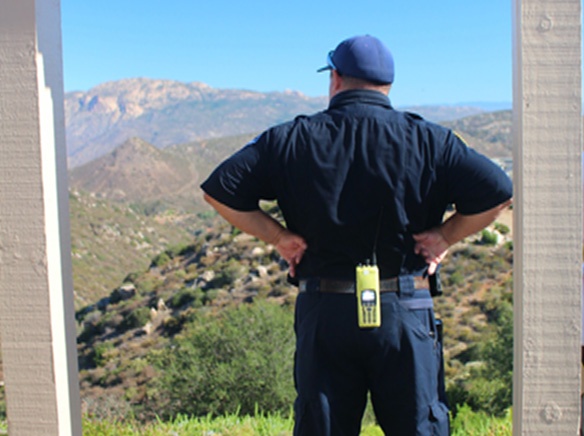