For years, a hose has been rigged each summer to carry water out a courthouse window to Fourth St., discharging in a city storm sewer grate next to the curb.

Top county officials are in a long-running legal battle with the well driller and the system designer to determine whose responsibility it is to fix the system. The legal dispute is now in its fourth year and appears to be headed for trail, perhaps more than one trial this year, according to district court records.

The well and piping were installed by Nebcon Inc. of Omaha. The designer was the M.E. Group of Lincoln. The questions of which company, if any, was negligent in the installation, and who should pay the losses, remains unsettled.

If the HVAC system worked as it should, the water that runs out the window would be piped into the ground in the geo-thermal system.

If all goes well in a geo-thermal system, water comes out of the ground at 50 degrees or so, and the temperature is captured in a heat exchanger, and sent through the building for either warming or cooling purposes, depending on the season. The “exhaust” water returns underground to be “reset” at 50 degrees again.

If the water coming into the building is overly warm or overly cold, then its ability to transfer heat is diminished, and the HVAC system becomes highly inefficient.

The problem became apparent soon after the system began operating in 2014.

Last fall, the county commissioners considered finding a better remedy for the situation than a hose to the gutter. They considered drilling a test well on courthouse property to see if water could be injected back in the ground there.
But the county did not go ahead with the well, in view of the legal complications of the unsettled lawsuit.

That lawsuit is slowly but steadily moving ahead. On May 4, Lincoln County submitted its witness list to the court, consisting of 15 people, including county officials and staff of the two companies who worked on the initial installation.
Along with the witness list, a statement of a professional engineer was filed with the court. The engineer was hired by the county’s legal team to analyze the entire situation.

In his written statement, the engineer notes that the original well is a “single well injection-extraction” system, which is relatively rare.

He found no evidence of unforeseen conditions underground that would adversely affect the design. But the engineer finds fault with both ME Group and Nebcon. According to his statement, both companies failed in their duties.

The next step in the dispute is to determine if the statute of limitations applies. ME Group says the time has run out for their company to be found liable.

That question will be decided at trial, the court said. After a pretrial conference on Thursday, May 13, in Dawson County District Court, the trial date was set at Sept. 28. Unless something changes before then, a six-member jury will decide if the statute of limitations applies in this case.

The cost of another well is estimated to be around $240,000, according to court document, which would be a considerable cost for the taxpayers.

So far, the county has paid $221,913 to Nebcon for the existing system, for which they want to be reimbursed, along with their legal bills.

Meanwhile, the quickest remedy is the one that looks so strange to people passing by the courthouse — piping water out of a window to the storm sewer gutter in the street. That could be done again this summer.

It looks like it will be several months before a more permanent remedy is found.

Tue Jun 1 , 2021
architecture firm lllab. unveils its proposal for the construction of the antuo hill museum in shenzhen, china. dubbed ‘cultural quarries’, the project highlights the history of the site, which had been home to a large-scale blasting project starting in 1997, with about half of the hill being excavated in order […] 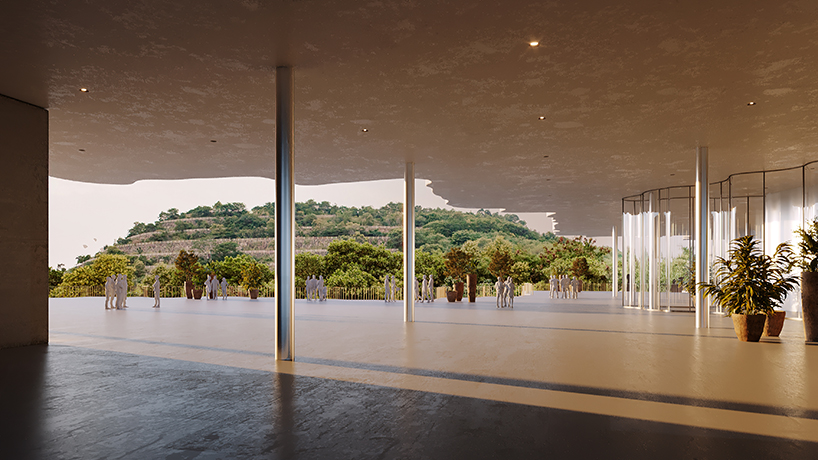