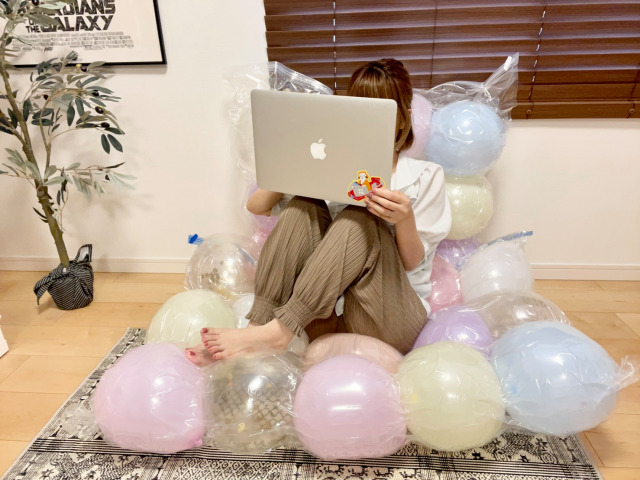 Japan’s 100-yen stores are magical places. We’ve seen time and again how you can get pretty much anything there, from raincoats that literally fit in your pocket to 35 different ways to boost the volume on your phone’s speakers.

And, if you’re willing to get a little creative, you can even get furniture there too.

We recently saw some people posting “balloon beds” on social media that they’d created for their children, but we wondered if adults could use them as well. Could the air-filled plastic sacs hold up under our significantly girthier girth?

▼ Our Japanese writer Puniko Ninoude went to the 100-yen store to find out.
There, she bought two packs of balloons and a futon vacuum seal bag.

The vacuum seal bag was 200 yen, so all together everything was 400 yen (US$3.64). She also “splurged” on some sparkly balloons, but if you’re on an even stricter bed-budget, you could just stick with the single bag.

▼ Thus began the arduous task of blowing up all of the balloons.

▼ Puniko put them all in the seal bag, paying careful attention to the color patterns…

▼ …and then stuck in a vacuum to suck out the air and seal them airtight!

▼ She was surprised at how easy it was, but now came the real test.
Would the bed pop like packing peanuts under her adult size?

▼ Nope, it was a success! Even when she brought her legs up and pushed all her weight onto it, there was zero poppage.

▼ The bed stayed inflated even when rocking back and forth…

▼ …or when rolling from side to side too.

According to Puniko, lying on the felt a bit like floating. It was different than being on the floor or a sofa, and she was shocked at how stable it felt beneath her.

In fact, her only complaint was that it wasn’t long enough for her to lie down on it from head to toe. Thankfully that was an easy problem to fix…

▼ …by simply making another one!

▼ All that rocking back and forth earlier really tuckered her out.
Thankfully, now she had the perfect place to take a nap.

▼ Having two also allowed her to prop one up against the wall.
It felt like she was sitting on a puffy mat floating on top of a calm pool.

▼ You can also lean them together and make a balloon-bed pillow fort!

As far as Puniko was concerned, the experiment was a rousing success. However, there were two drawbacks to the balloon bed that she found:

▼ You can re-seal the bag to fix it, or just remove the balloons,
draw some sad faces on them, and wait for them to slowly wither away.

If you’re looking for some fun, temporary furniture for a party, or as a way to spruce up a sitting area, then this could be a great idea.

So long as you don’t invite the Guinness World Record holder of butt-balloon-smashing, of course.

Sat Aug 28 , 2021
As more people start composting to reduce food waste, some companies see a business opportunity. From the release of Whirlpool’s Zera Food Recycler in 2017 to the launch of Lomi by Pela earlier this year, electric composters could be an attractive composting solution if you’re an urbanite or apartment dweller […]